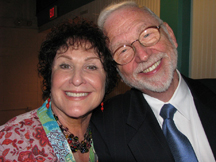 The Palm Beach Poetry Festival is a nonprofit organization dedicated to fostering the writing, reading, performance, and appreciation of poetry – by presenting an annual festival and other poetry events in Palm Beach County – featuring America’s finest poets. It is our goal to provide a nationally recognized learning opportunity for writers of poetry and a world-class, life-enriching series of cultural events for our listening audiences. As a Florida nonprofit corporation, part of our mission is to organize educational outreach programs that bring the pleasures of poetry to our community. We are a proud member of the Palm Beach County Cultural Council.

Our founder, Miles Coon began working to create this annual poetry festival in 2004 with his wife, Mimi Coon, board members Carol and Alan Benjamin, and other friends. We are grateful to our board members, our staff, all of our interns, volunteers, the poets who comprise our Advisory Board, and our sponsors and supporters for everything they do to make the festival a reality.

Staff
Nickole Brown
President
Nickole Brown is the author of Sister and Fanny Says. She teaches as part of the Sewanee School of Letters Program and lives in Asheville, North Carolina, where she volunteers at several different animal sanctuaries. Since 2016, she’s been writing about ... Read more >
Miles Coon
President, Emeritus; Chairman of the Board & Founder
Miles A. Coon, (January 1938 – May 2022) founded the festival in January, 2005, and served, without compensation, as Festival Director until June 30, 2014 as well as Chairman of the Board, and President. The ... Read more >
Susan R. Williamson
Festival Director
Susan R. Williamson’s poems have previously appeared in Beltway Quarterly, Connotation Press’s Hoppenthaler Congeries, Crab Orchard Review, Forge, Paterson Literary Review, Poetry East, Sanskrit, Smartish Pace, StorySouth, Virginia Quarterly Review, among others. Her chapbook, Burning After ... Read more >
Brittany Owens, Festival Coordinator
Brittany Owens serves as Festival Coordinator. She was an intern for the Palm Beach Poetry Festival for three consecutive years before joining the Festival’s staff. She recently completed her MFA at Florida International University and ... Read more >
Blaise Allen, Ph.d.
Director of Community Outreach
Blaise Allen, Ph.D., Director of Community Outreach Blaise is an award-winning poet and photojournalist. Her poems have been widely published in anthologies and magazines including: Wingbeats: Exercises & Practice in Poetry, Dos Gatos Press, The ... Read more >
Board of Advisors
Laure-Anne Bosselaar
Chair
Laure-Anne Bosselaar is the author of The Hour Between Dog and Wolf, Small Gods of Grief, winner of the Isabella Gardner Prize for Poetry for 2001, and of A New Hunger, an ALA Notable Book. Four Way ... Read more >
Billy Collins
BILLY COLLINS is an American phenomenon. No poet since Robert Frost has managed to combine high critical acclaim with such broad popular appeal. His work has appeared in a variety of periodicals including The New ... Read more >
Stephen Dobyns
STEPHEN DOBYNS has published many books of poems and 20 novels. He has earned a Melville Cane Award, the National Poetry Series, and the Lamont Poetry Prize of The Academy of American Poets. His renowned book ... Read more >
Mary Karr
MARY KARR has received numerous honors and awards for her work, including fellowships from the Guggenheim Foundation, the National Endowment for the Arts, and a Bunting Fellowship from Radcliffe College. She has received a Pushcart ... Read more >
Thomas Lux
Founding Chair
THOMAS LUX 1946-2017 Acclaimed poet and teacher, born in Northampton, Massachusetts, in 1946 to working class parents, Thomas Lux attended Emerson College and the University of Iowa. He began publishing haunted, ironic poems that owed ... Read more >
Vijay Seshadri
VIJAY SESHADRI‘s collections of poems include James Laughlin Award winner The Long Meadow (Graywolf Press, 2005) and Wild Kingdom (1996). His poems, essays, and reviews have appeared in AGNI, The American Scholar, Antaeus, Bomb, Boulevard, ... Read more >
Ellen Bryant Voigt
ELLEN BRYANT VOIGT has published seven volumes of poetry—Claiming Kin (1976), The Forces of Plenty (1983), The Lotus Flowers (1987), Two Trees (1992), Kyrie (1995), a finalist for the National Book Critics Circle Award, Shadow ... Read more >