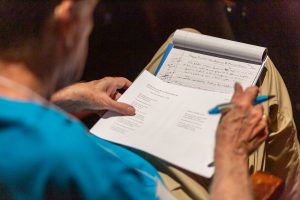 Additional focus on your work is available in individual one-hour conferences on up to 10 pages of poetry. Conference Faculty: Lorna Knowles Blake, Sally Bliumis-Dunn, Nickole Brown, Jessica Jacobs, and Angela Narciso Torres. Applicants may request a conference with their application or by direct conference application on Submittable.

Appointments will be confirmed upon acceptance to a workshop, first-come-first served. Requests for conferences may be made early, along with applications and will be accepted until December 1st. Manuscripts are due to faculty for review by December 10th. The cost is $120, payable upon confirmation. A great opportunity!

Conferences are available to accepted participants and auditors with their application, but also to the general public via Submittable.

LORNA KNOWLES BLAKE was born in Havana, Cuba and spent her childhood in Argentina, Uruguay, Venezuela and Puerto Rico before coming to the United States. She received the 2017 Able Muse Award for her book, Green Hill, published in 2018; her poetry collection, Permanent Address, won the 2006 Richard Snyder Memorial Award from Ashland University Press.  Blake’s work also has appeared in several anthologies, including The Cento: A Collection of Collage Poems and Chance of a Ghost: An Anthology of Ghost Poems. She serves on the editorial board at the journal Barrow Street and on the advisory committee for WCAI’s Poetry Sundays radio program. She teaches creative writing in Brewster, on Cape Cod and in New Orleans.

SALLY BLIUMIS-DUNN teaches Modern Poetry at Manhattanville College. She received her MFA in Poetry from Sarah Lawrence e in 2002. Her poems have appeared in  Bellevue Literary Review, New Ohio Review, the NYT, Paris Review, PBS NewsHour, PLUME, Poetry London, Prairie Schooner, The Writer’s Almanac and The Academy of American Poets’ Poem-a-day,  among others. Her books, Talking Underwater and Second Skin were published by Wind Publications in 2007 and 2010, respectively. Her latest book, Echolocation, was published in 2018 with Plume Editions. In 2002, she was a finalist for the Nimrod/Hardman Pablo Neruda Prize. In 2008, she was invited to read at the “Love Poems Program” at the Library of Congress.  More available on Sally at: http://terrain.org/2013/poetry/two-poems-by-sally-bliumis-dunn, on Academy of American Poets, Writer’s Almanac, From the Fishouse.org, on PBS News Hour Weekly Poem, and Rattle. Find out more about Sally Bliumis-Dunn at http://www.sallybliumisdunn.com.

NICKOLE BROWN received her MFA from the Vermont College, studied literature at Oxford University, and was the editorial assistant for the late Hunter S. Thompson. She worked at Sarabande Books for ten years. She’s the author of Sister, first published in 2007 with a new edition reissued in 2018. Her second book, Fanny Says (BOA Editions), won the Weatherford Award for Appalachian Poetry in 2015. Currently, she serves as the Editor for the Marie Alexander Poetry Series and teaches at the Sewanee School of Letters MFA Program and the Great Smokies Writing Program at UNCA. She lives with her wife, poet Jessica Jacobs, in Asheville, NC, where she periodically volunteers at four different animal sanctuaries. A chapbook called To Those Who Were Our First Gods won the 2018 Rattle Chapbook Prize, and her long sequence The Donkey Elegies (Sibling Rivalry Press) was published as a chapbook in 2019. Nickole and Jessica recently published the book Write it! 100 Poetry Prompts to Inspire (Spruce Books).

Jessica Jacobs is the author of Take Me with You, Wherever You’re Going (Four Way Books, 2019), named one of Library Journal‘s Best Poetry Books of the year, winner of the Devil’s Kitchen Reading Award from Southern Illinois University and the Goldie Award from the Golden Crown Literary Society, and a finalist for the Brockman-Campbell, American Fiction, and Julie Suk Book Awards. Her debut collection, Pelvis with Distance (White Pine Press, 2015), a biography-in-poems of Georgia O’Keeffe, won the New Mexico Book Award in Poetry and was a finalist for the Lambda Literary Award. Her chapbook In Whatever Light Left to Us was published by Sibling Rivalry Press in 2016. Her poetry, essays, and fiction have appeared in publications including Crazyhorse, The Missouri Review, New England Review, Orion, and Guernica. An avid long-distance runner, Jessica has worked as a rock climbing instructor, bartender, editor, and professor, and is now the Associate Editor of Beloit Poetry Journal. She lives with her wife, the poet Nickole Brown in Asheville, North Carolina, with whom she recently published the book, Write it! 100 Poetry Prompts to Inspire (Spruce Books, 2020).

Angela Narciso Torres is the author of two full length poetry collections; Blood Orange (Willow Books Poetry Prize) and What Happens is Neither (Four Way Books); her chapbook, To the Bone, was published earlier this year by Sundress Publications. Her other work appears or is forthcoming in POETRY, Quarterly West, Missouri Review, Bellingham Review, Cortland Review, and PANK. A graduate of Warren Wilson’s MFA program and Harvard Graduate School of Education, Angela has received fellowships from Bread Loaf and Ragdale Foundation. She was awarded the 2019 Yeats Poetry Prize by the W.B. Yeats Society of New York. Born in Brooklyn and raised in Manila, she is a senior and reviews editor for RHINO and serves on the editorial panel of New England Review.