“Folly-scope” by Mary Jo Thompson; inspired by Galloping Towards the Dream by Camomile Hixon

“Unicorn Redux” by Donna Disch; inspired by Galloping Towards the Dream by Camomile Hixon

“Fractals” by Patricia Gray; inspired by “Fractal” by William Montgomery 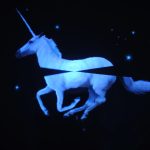 Inspired by “Galloping Towards the Dream”
by Camomile Hixon

A poet tells me Try not to use the word dream in a poem. It’s tired.
But d—m is something I do, I say to myself, an actual
experience of mine, no different than seeing this animated
unicorn the size of a rabbit, gallopflying on piston legs
above implied ground. A light-sculptor made its moving
image inside a small, flat disc, grooved like a record
and hung on a wall where it seems as 3-D as a ship
in a bottle. I’m mesmerized by light fallrising, by hunky
hind quarters, never tired. She’s added glitter, called her piece
“Galloping Toward the Dream.” I cannot turn away
drawn as I am to flickerlight.

I’m reminded of a man I rented from once
named Mr. Printy. He claimed to be an inventor of the hologram.
Think of tinkering, he said, with a light-beam splitter, setting mirrors
to mold waves until you see front and sides, top and bottom, like solid
skin. Though a scientist, Printy loved a practical joke. He tested
holograms on his bunny-loving wife, told her to pick up
a projected rabbit. And she did. At least she tried. And the thing
that had been a folly, a cute over-used metaphor for creature love,
did not become self-aware or consider its existence hokey,
though Printy’s wife may have. And that’s just it. A unicorn
the size of a rabbit gallops inside of a flat starry sphere. A guy
projects rabbit facsimiles into a woman’s arms—am I too proud
to allow an old trope’s reboot? I’m writing the word dream.

Mary Jo Thompson is the author of Stunt Heart, selected by Henri Cole for the 2016 Backwaters Prize. Her work has appeared in North American Review, The Journal, Missouri Review, Field, Prairie Schooner, Rhino, Indiana Review, Carolina Quarterly, Spillway, and Beloit Poetry Journal, among other journals, and is anthologized in Best American Poetry 2011 and Another and Another: An Anthology from the Grind Daily Writing Series. Thompson received an MFA in Creative Writing from the Warren Wilson Program for Writers. She teaches arts educators in the Twin Cities. http://www.maryjothompson.com/

Inspired by “Galloping Towards the Dream”
by Camomile Hixon

Flies in your eyes. Flies on your fetlocks
and flanks, playing tag with your tail.
But now you are free of the frescoes, tapestries,
trick poses, token virgins, coats of arms
and that spoof of a horn. Good that you
ate the apple I offered and became a beast
of burden in the land of sun and money.

Your belly slowly barreled with oats and hay.
Gently, a bit in your mouth, heels in your sides,
my soft voice and the weight of my body.
Many mornings we gallop with no destination,
till your reins and girth foam with lather.

Our days numbered and our numbers dazed.
No fiddle, no fire, no Rome, for us, no expectations
of our saddles of flesh and riddles of bone.

You simmer in a field flush with vetch and clover.
Head bowed, lost in the trance of the graze…
nuzzle and shear, scythe and nuzzle
the prophesied leaves and stems.
The day ablaze and the hours uncounted.

The here the now the lost the found, you shun
the roots that will rise again within the myth
of this manger ranging as far as we can see,
mute about its mystery —
how its seeds scuttled and flew
without wings and buried themselves
in the baritone earth to live among us
with their secrets and patient waiting
to be beautiful and useful and worthy
of such words as Lo and Behold. 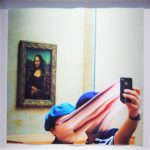 Mona, it’s not
your cryptic smile
they’re here to admire.

Might’ve been true,
but get with it, girl, adjust
attitude, get in step.
It’s tech effect
that’s hep, these days,
ain’t dabs of paint.

More chill than the Louvre
or Notre Dame, way
more cool than the River Seine
or Moulin Rouge, totally
more awesome
than you, Renaissance chick,
is the selfie
they’re about to click.

Phyllis Wax writes in Milwaukee on a bluff overlooking Lake Michigan. Among the anthologies and journals in which her poetry has appeared are: Rhino, The Widows’ Handbook, Birdsong, Spillway, Peacock Journal, Surreal Poetics, Naugatuck River Review, New Verse News, Portside, Star 82 Review. A Best of the Net, Pushcart Prize and Bettering American Poetry Anthology nominee, she has read her poetry on the radio, and in coffee shops, libraries and bars. Her work has been exhibited with art quilts and weavings in a variety of venues within Wisconsin as part of four poet/fiber artist collaborations. Reach her at: poetwax38@gmail.com.

The Louvre’s white walls
a perfect canvas
against matching berets
his, cobalt blue mine, ultra marine..

We fashioned ourselves fauves
free from restraint
mingled forms, avant gaude,
all about the colors.

Jeff, I think his name was Jeff,
his cell phone framed us
the yellow box contained us.
My frozen smile in place.
Click.

My face morphed into the camera
My smile melted in moments.
Mona Lisa,
I wasn’t in a glass enclosure.
Jeff, I think his name was Jeff. 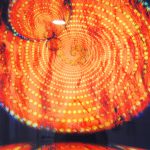 Inspired by “Fractal” by William Montgomery

To get to roundness, the linear
surrenders—shrinks like Alice,
but smaller, much smaller—so that
an isosceles triangle can become
just a speck, joining with others
like it to form a larger, natural shape:
a leaf or a landscape, let’s say,
in a crucible of computer code,
where linear becomes spherical
through art.

How solid and
peculiar our reasoning has been,
excluding shapes that don’t fit,
leaving them behind—like Noah’s
cubits—till geometric could represent
organic, as in images gathered in poems
that pull it all together smooth and whole—
but still full of irregular curves like
the body’s own—so we can use them
to repaint and restock this frabjous,*
funanimal* world.

Patricia Gray, author of the collection Rupture from Red Hen Press, formerly headed the Library of Congress’s Poetry and Literature Center. An award-winning poet, Gray most recently had poems short-listed for the Faulkner Wisdom Poetry Prize. She has a poem in the current issue of Oberon and others are forthcoming in Endlessly Rocking, an anthology celebrating the 200th anniversary of Walt Whitman’s birth. Gray lives in Washington, DC and teaches creative writing for The Writer’s Center in Bethesda, Maryland.