May 22, 2022 – Palm Beach — It is with deep sadness that we report that Festival Founder & President, Miles Coon, passed away peacefully on Saturday, May 21, 2022 in Palm Beach. He leaves behind his loving family, including his wife Mimi, son Matthew, daughter Jennifer, and grandson Elias. 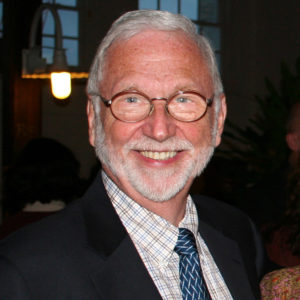 Miles was a brilliant student, lawyer, writer, and poet. His sense of humor and wit were always at the ready, especially in the puns he shared with delight. He graduated with highest honors from the University of Virginia in 1959 and Harvard law school in 1962. He practiced law for several years, and ran a manufacturing business for 30 years, which he sold, thereafter turning his attention to poetry.

Since that time, Miles became even more involved with poetry. He attended writing conferences and workshops as a self-described “poetry junkie” and entered the Sarah Lawrence MFA program where he worked with Thomas Lux who became a beloved teacher, mentor, and advisor. Miles’ poems appeared widely in many journals and magazines. He received his MFA in 2002.

In 2005 he founded the Palm Beach Poetry Festival and served as its President and Chairman of the Board. For 18 years, the festival has benefited greatly from his leadership, graciousness, and generosity. He has offered support to hundreds of aspiring poets who have attended the festival workshops, gifted partial and full scholarships and fellowships, and endeavored to honor the work and achievements of festival faculty and featured poets who presented workshops and readings each January.

Many articles and interviews have been published with Miles as primary spokesperson for the Festival. In 2014, when the festival hosted its first sitting U.S. Poet Laureate, Natasha Trethewey, South Florida PBS interviewed Miles for the Art Loft program. He spoke passionately and flawlessly about the ethos, mission, importance, and delights of poetry and the festival. You can listen to Miles speak from the heart in this PBS Interview.

Miles never abandoned writing his own poems. And we’re profoundly sad that he won’t be here to celebrate the publication of his first full-length collection, The Quotient of My Self Divided by My Self, forthcoming from Press 53 in June. However, a beautiful Interview with Miles by long-time festival poet Laure-Anne Bosselaar was recorded at the end of last year. In this recording, he speaks about the festival, the importance of poetry in his life, and of writing poems. He also reads some of the beautiful poems from his book.

Miles always liked to say that the festival would not be a festival without the participants, auditors, faculty, featured poets, interns, staff and friends who attend and give support. He believed passionately in the power of poetry and did great work to share that belief widely. That you are receiving this message today is an affirmation of accomplishment of the mission he set for himself and for the festival.

We will keep you informed about plans for a memorial to celebrate his life, and there will surely be a reading of the poems from his new book. We’ll send you the details as that comes clear.

Miles would want once again to thank you for your poems, your dreams, your interest, participation, and for the joy he found in gathering the poets together in South Florida. The boundless inspiration that we have found through this festival would not have been possible without Miles Coon.