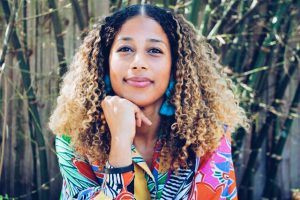 Harry Belafonte has called AJA MONET “The true definition of an artist.” An internationally established poet of Cuban-Jamaican descent, Monet’s craft is an in-depth reflection of emotional wisdom, skill, and activism. The youngest individual to win the legendary Nuyorican Poet’s Café Grand Slam title, she is recognized for combining her spellbinding voice and powerful imagery on stage. Monet was a featured speaker at the Women’s March on Washington DC where she read the title poem of her latest book My Mother Was A Freedom Fighter (Haymarket Books 2017). Monet’s other books include Inner-City Chants & Cyborg Cyphers (2015), and The Black Unicorn Sings (Penmanship Books). In addition, she collaborated with poet/musician Saul Williams on the book Chorus: A Literary Mixtape (MTV Books/Simon & Schuster).