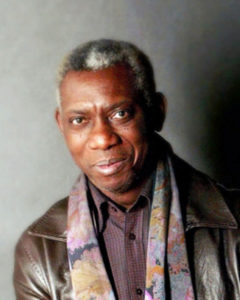 Yusef Komunyakaa is our featured Thomas Lux Memorial Poet for the 18th Annual Palm Beach Poetry Festival. On Tuesday, January 11th, Komunyakaa will sit for a conversation with poet and consummate interviewer, Laure-Anne Bosselaar, who inspires the most original and interesting stories from our special guests. On the evening of Wednesday, January 12th, he will deliver the Thomas Lux Memorial Reading. From Neon Vernacular, his 1994 Pulitzer Prizing winning collection, to his new collection, Everyday Mojo Songs of Earth, New and Selected Poems, 2001-2021, Yusef Komunyakaa’s voice remains a vital presence in the world of poetry.

Located at Maya Lin’s Vietnam War Memorial, Komunyakaa’s famous poem, “Facing It”, allows the reader to reflect not only on the poet’s reckoning with the controversial war, but also to capture the artistic vision of the memorial—that it creates moments of reflection unique to each visitor. In his recent interview with NPR’s Scott Simon, he says, “poetry sort of took hold of me and demanded all of my attention and spirit.” When asked to explain how that feels, he continues,“It feels like one has been chosen as a caretaker of observation. There’s a certain reality, but also there’s a certain kind of dreaming, and that place takes us someplace that we never dreamt of.”

Stay tuned for more information on this great poet and how he will take us somewhere we never dreamt of.

Yusef Komunyakaa’s latest collection, Everyday Mojo Songs of Earth: New and Selected Poems, will be published in June, 2021, by Farrar, Straus and Giroux.

(Note: The following bio is from poets.org)

On April 29, 1947, Yusef Komunyakaa was born in Bogalusa, Louisiana, where he was raised during the beginning of the Civil Rights movement. He served in the United States Army from 1969 to 1970 as a correspondent, and as managing editor of the Southern Cross during the Vietnam war, earning him a Bronze Star.

He began writing poetry in 1973, and received his bachelor’s degree from the University of Colorado Springs in 1975. His first book of poems, Dedications & Other Darkhorses (R. M. C. A. J. Books), was published in 1977, followed by Lost in the Bonewheel Factory (Lynx House Press) in 1979. During this time, he earned his MA and MFA in creative writing from Colorado State University and the University of California, Irvine, respectively.

Komunyakaa’s prose is collected in Blues Notes: Essays, Interviews & Commentaries(University of Michigan Press, 2000). He also coedited The Jazz Poetry Anthology (with J. A. Sascha Feinstein, 1991), cotranslated The Insomnia of Fire by Nguyen Quang Thieu (with Martha Collins, 1995), and served as guest editor for The Best of American Poetry 2003.

He has also written dramatic works, including Gilgamesh: A Verse Play (Wesleyan University Press, 2006), and Slip Knot, a libretto in collaboration with Composer T. J. Anderson and commissioned by Northwestern University.

About his poetry, the poet Toi Derricotte wrote for the Kenyon Review, “He takes on the most complex moral issues, the most harrowing ugly subjects of our American life. His voice, whether it embodies the specific experiences of a black man, a soldier in Vietnam, or a child in Bogalusa, Louisiana, is universal. It shows us in ever deeper ways what it is to be human.”

Komunyakaa is the recipient of the 2011 Wallace Stevens Award. His other honors include the Ruth Lilly Poetry Prize, the William Faulkner Prize from the Université de Rennes, the Thomas Forcade Award, the Hanes Poetry Prize, fellowships from the Fine Arts Work Center in Provincetown, the Louisiana Arts Council, and the National Endowment for the Arts.

He was elected a Chancellor of the Academy of American Poets in 1999. He has taught at University of New Orleans, Indiana University, as a professor in the Council of Humanities and Creative Writing Program at Princeton University. He lives in New York City where he is currently Distinguished Senior Poet in New York University’s graduate creative writing program.