The perfect setting for this workshop is the beautiful landscape of the Morikami Museum and Gardens. The festival returns for the 12th year to explore this poetic form with Yaddyra Peralta, who will lead participants to be inspired by the form and their surroundings.

Participants will learn the basics of the Japanese literary form of haiku and haibun, a combination of prose and haiku. Participants will look at a brief history of the haibun and examine various examples, with a focus on the work of haiku master Kobyahsi Issa whose work is known both for its humanism and its sense of humor. Haibun has often been used as a means to chronicle autobiographical experiences or to detail observations seen during travels. Workshop participants will learn about the history of the forms, examine various examples, past and present, and then head to Morikami’s beautiful gardens to generate their own haiku and haibun. 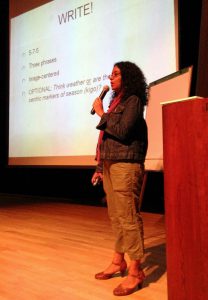 YADDYRA PERALTA is a poet who teaches writing and literature at Broward College and Miami Dade College. Her poems have been published in Eight Miami Poets (Jai Alai Books) and Ghazals for James Foley (Hinchas Press). Her poems have also appeared in Ploughshares, Jai Alai, Abe’s Penny, Tigertail, The New Poet, and Hinchas de Poesia. In 2013, she was a Visiting Writer at the Betsy Hotel’s Writer’s Room in South Miami Beach, Florida and one of six collaborative Helen M. Salzberg Artists-in-Residence at Florida Atlantic University’s Jaffe Center for the Book Arts where she contributed to the collaborative artists’ book Conversation, Too (Extra Virgin Press).  Before becoming Assistant Director of the Palm Beach Poetry Festival, she attended workshops as a participant, an auditor, an intern, and, in 2013 to 2014, served as the festival’s Director of Social Media.