“Swings Below Sea,” by Gabriella Alexis; Inspired by: Fishermen Returning to Boyton Inlet

“Under the Boat,” by Stephanie Casio; Inspired by: Fishermen Returning to Boyton Inlet

“My Old Man and the Sea: A Cento,” by Jennifer Grant; Inspired by: First sailfish, Diane (Martini) Brewer (1980)

SWINGS BELOW SEA by Gabriella Alexis

The manatees shift away from the shore,

placing the luck they have on their shoulders

keeping them safe from the weather’s downpour.

The hot and cold air is getting bolder.

Singing in the surfaces air packets,

The goal is to make it through the tropics

and tread along underneath below

It forms into a dream, catastrophic.

The reality is not red bordeaux

it’s merely the only fallow.

Gabriella Alexis is a senior at Miami Arts Charter School. She majors in creative writing and is a published author. She has recently been published in Rattle, Orange Island and Creative Communication. She lives in Miami with her mother and grandmother. She loves poetry and spoken word.

When the man and the boy

push out the boat

when they yank the cord

that binds them to the round peach light

the swarms of silvery mullet

in the bait pail —

it’s not about the fish.

It’s about the boy.

the father guides the boat

across the morning channel

and steers the son into the chop

How the father tests the breeze

How he models the cast

and watches the boy

then watches the boy

reel in the catch —

caught in the sport of father and son.

It’s about the boy

who helms the boat home

and stands next to the man,

weighing the space between them.

Jo Ann Steger Hoffman is a writer, editor, and former corporate communications director whose publications include a children’s book, short fiction and a variety of poems in literary journals, including The Merton Quarterly, Pinesong, Fall Lines and New Verse News. Her 2010 non-fiction book, Angels Wear Black, recounts the only technology executive kidnapping to occur in California’s Silicon Valley. A native of Toledo, Ohio, she and her husband now live in Cary and Beaufort, North Carolina.

UNDER THE BOAT by Stephanie Casio

their scales glinted akin to wishes kissed by kids

that have been hoping and praying in their beds.

Nanay says not to swim deeper, she forbids,

but I know gems are found along the sea floor

I dream of coral castles with tortoise doors

to dance with clown fishes and sea horses,

Turning and tumbling with the ocean’s forces

I let it guide me with motherly hands

and through my goggles I sift through the sand

*Nanay: “mother” in the Filipino dialect of Ilonggo

“Stephanie Casio (she/they) is a senior from Miami Arts Charter who is in the creative writing program. They enjoy writing subject matters close to their heart such as their Filipino heritage and mixing elements of it into their poetry and prose. On days they are not writing their fantasy novel about pirates or creating cathartic poems, they are elbow deep in AP Psych homework and can’t wait to get exams over and done with.” 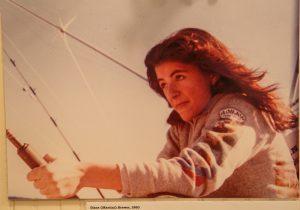 MY OLD MAN AND THE SEA: A Cento, by Jennifer Grant

So kind, so beautiful, so cruel

You told and told for years only boys

The moon illuminates from behind,

shadowing you, my long deceased dad:

a fisherman just as a fish was born

Jennifer Grant’s poem, “My Old Man and the Sea: A Cento,” surfaced after listening to poet Tina Chang’s discussion on ‘The Hybrid Beast’ at this year’s Palm Beach Poetry Festival. Jennifer combined a dash of fishing and a little Papa (Hemingway, that is) to the mix. Her first hybrid collection, which meanders through the alphabet of poetic form, Good Form, is now available through Negative Capability Press. She lives in Gainesville, FL. jenniferlynngrant.com. 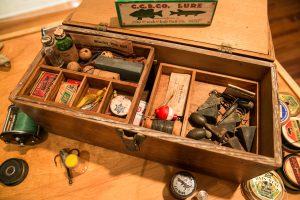 CATCH AND RELEASE by Allen Sweat

The wooden box sits with a lead heart

in an attic corner yet it’s filled with

in the flashy chrome of the lake now

sealed among hooks dulled by

rough as the dorsal of giant mahi mahi

pulled free on a winter afternoon.

Trophies with their own stories.

Go ahead, open it. Feel how sharp

the Creek Chub plug diving for that next

world record. How the bobber, red

a new toy straight out of the package

bought yesterday at the hardware store.

As you close the lid for 90 more years

light the cigar and listen to the brown worm

beg for release back into Lake Ida’s

in hopes of hooking another spirit

racing against time to net the hope

found in each new Delray morning.

Allen Sweat was born and raised in Athens, Georgia and lives in West Palm Beach, Florida with his wife and children where he works in the aerospace industry.  As an outdoor enthusiast he enjoys fishing deep inside the Everglades and along the coastal waters of South Florida.  His work is forthcoming in Apalachee Review and has appeared in publications such as The Liner and Emerge Literary Journal.  He studies with the Writer’s Studio in New York.