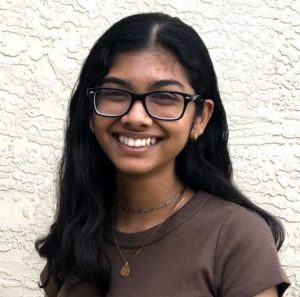 Freshman, Dreyfoos School of the Arts

The anniversary of 9/11 had just passed.
We were getting gas at the station, and my mom stepped out of the car to pay for it.
I thought she looked normal enough,
but to the white man getting gas behind us who had a bone to pick with “threats to his country”
her brown skin flashed red like a blaring alarm ringing throughout his body.
“GET OUT OF MY COUNTRY YOU TERRORIST!”
My mom immediately got back in the car.
She told me everything would be okay, we just had to wait for him to give up and leave.
But the waiting was torture.
Stuck in that car where I used to feel safe, not knowing when he was going to erupt into fury.
“WE NEVER SHOULD’VE LET DIRTY IMMIGRANTS LIKE YOU INTO MY COUNTRY!”
30 minutes of anxious silence.
30 minutes of breathing in the suffocating air drowned in dirty, gunky oil.
30 minutes later his dark blue pickup finally rolled out of the station behind us.
The smell of gasoline still makes me sick to my stomach.

It was January of this year.
The air was getting colder, nipping at my face as I walked along the beach.
That’s when I heard it.
It happened in an instant, but that one word twisted time, bent space,
made that one moment last a millennium.
He called me the n-word.
His white BMW sped away, leaving behind the stench of gasoline
and that one word to bounce around in my brain like a pinball machine for weeks on end.
I thought I was okay, but “I’m busy with homework” built on top of “I already have plans,”
and now I haven’t gone back to that beach since it happened.