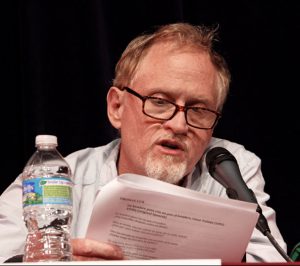 Poetry is often accused of being a flighty and ephemeral art, but even the most impalpable of materials can yield dynamic poems when we ground them in the real world. Language is rooted in the tongue, emotions stab at the heart, memories flash across an ultravivid movie screen in the mind. This workshop will provide a blueprint for building poems from those essential elements using concrete images, well-engineered syntax, and deftly-hewn lines. Bring a poem in process to the first class, with copies for the group; thereafter we will write new poems and workshop them day by day. Over the course of the week we will generate new work, consider strategies for revision, and depart Delray Beach with better poetic skills (and better tans) than when we arrived.

CAMPBELL McGRATH is the author of ten books of poetry, including XX: Poems for the Twentieth Century (Ecco Press, 2016), In The Kingdom of the Sea Monkeys (Ecco Press, 2012), Shannon (Ecco Press, 2009), and Seven Notebooks (Ecco Press, 2007). His third book, Spring Comes to Chicago (Ecco Press, 1996), won the Kingsley Tufts Poetry Award. Nouns  & Verbs, New and Selected Poems is forthcoming in 2019.

He has received many of America’s major literary prizes for his work, including the Kingsley Tufts Prize, a Guggenheim Fellowship, a MacArthur “genius” Fellowship, a USA Knight Fellowship, and a Witter-Bynner Fellowship from the Library of Congress. His poetry has appeared in the New Yorker, Harper’s, The Atlantic and on the op-ed page of the New York Times, as well as in scores of literary reviews and quarterlies. Born in Chicago, he lives with his family in Miami Beach and teaches at Florida International University, where he is the Philip and Patricia Frost Professor of Creative Writing.