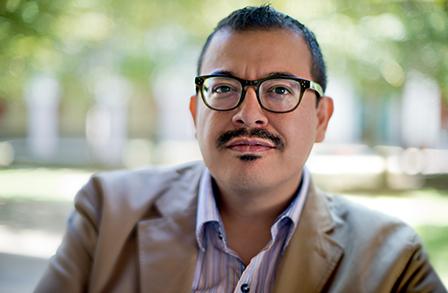 Eduardo C. Corral earned degrees from Arizona State University and the University of Iowa Writers’ Workshop. His debut collection of poetry, Slow Lightning (2012), won the Yale Younger Poets Prize, making him the first Latino recipient of the award. His second collection is Guillotine (2020). Praised for his seamless blending of English and Spanish, tender treatment of history, and careful exploration of sexuality, Corral has received numerous honors and awards, including the Discovery/The Nation Award, the J. Howard and Barbara M.J. Wood Prize, a Whiting Writers’ Award, and a fellowship from the National Endowment for the Arts.
A CantoMundo Fellow, he has held the Olive B. O’Connor Fellowship in Creative Writing at Colgate University and was the Philip Roth Resident in Creative Writing at Bucknell University. In 2016 he won the Holmes National Poetry Prize from Princeton University. Corral teaches in the MFA program at North Carolina State University in Raleigh and is currently a Hodder Fellow at Princeton University.