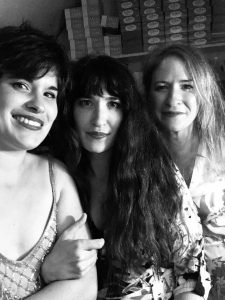 The Parkington Sisters are from Wellfleet Massachusetts, a town of crashing waves, gnarled pine trees, world famous oysters and the only town clock in the world that still rings ship’s time. The three sisters emerge from a lineage of musicians – daughters of a prog rock musician and a classically trained guitarist, they were raised constantly playing and writing music together, an immersion that has led to the individual and collective creative force they are today. Rose, Sarah and Ariel are songwriters and dynamic multi-instrumentalists who play guitar, piano, violin and viola. Like their hometown surroundings, the band boasts a collective magic — part chemistry, part alchemy, and entirely mysterious. They incorporate the eclectic songwriting and passions of artists like Joni Mitchell, Aimee Mann, Neil Young & June Carter, but with their own unique brand of soaring melodies, vibrant harmonies and intricate string arrangements.

They have shared the stage with such divergent artists as Mavis Staples, Bruce Springsteen, Dispatch, Blitzen Trapper and the Dropkick Murphys and have performed in studios and on stages across the US, Canada, and Europe, including New York’s Radio City Music Hall, Bonnaroo, NPR’s Mountain Stage, and the Dodge Poetry Festival. Their releases include the recent string accompaniment to the spoken word release The Book of Hylas and their new collaboration with Tanya Donelly. Their new album Collide, produced by Chris Shaw, will also be released in the Spring.