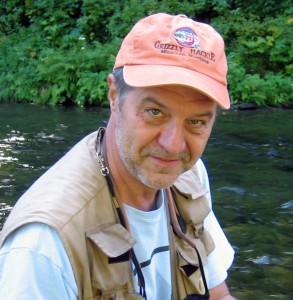 ROBERT WRIGLEY  grew up in Collinsville, Illinois, a coal mining town. He earned his BA (with honors) in English Language and Literature at Southern Illinois University and his MFA in Poetry from the University of Montana. His collections of poetry include Beautiful Country (Penguin, 2010); Earthly Meditations: New and Selected Poems (Penguin, 2006); Lives of the Animals (Penguin, 2003); Reign of Snakes (Penguin, 1999) – winner of the Kingsley Tufts Award.  He also authored In the Bank of Beautiful Sins(Penguin, 1995) – winner of the San Francisco Poetry Center Book Award and Lenore Marshall Award finalist; What My Father Believed (University of Illinois Press, 1991); Moon in a Mason Jar (The University of Illinois Press, 1986); and The Sinking of Clay City (Copper Canyon Press, 1979). Wrigley’s awards and honors include fellowships from: The National Endowment for the Arts; The Idaho State Commission on the Arts; The Guggenheim Foundation; The J. Howard and Barbara M.J. Wood Prize; The Frederick Bock Prize from Poetry Magazine; The Wagner Award from The Poetry Society of America, The Theodore Roethke Award from Poetry Northwest, and two Pushcart Prizes. He was the State of Idaho’s Writer-in-Residence from 1987-1988, and taught at Lewis-Clark College, The University of Oregon, The University of Montana (as the Richard Hugo Chair in Poetry), and at Warren College. He is the Director of the MFA Program in Creative Writing at the University of Idaho.