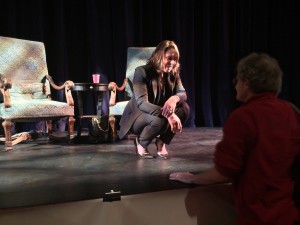 NATASHA TRETHEWEY is the 19th United States Poet Laureate (2012-2014). In his citation, Librarian of Congress James Billington wrote “Her poems dig beneath the surface of history—personal or communal, from childhood or from a century ago—to explore the human struggles that we all face.” She is the author of Monument: Poems New and Selected (Hougton Mifflin, 2018), which was longlisted for the 2018 National Book Award in Poetry; Thrall (2012), Native Guard (Houghton Mifflin), for which she won the 2007 Pulitzer Prize, Bellocq’s Ophelia (Graywolf, 2002), which was named a Notable Book for 2003 by the American Library Association, and Domestic Work (Graywolf, 2000). She is also the author of Beyond Katrina: A Meditation on the Mississippi Gulf Coast (University of Georgia Press). A memoir is forthcoming in 2013. Her first collection of poetry, Domestic Work (2000), was selected by Rita Dove as the winner of the inaugural Cave Canem Poetry Prize for the best first book by an African American poet and won both the 2001 Mississippi Institute of Arts and Letters Book Prize and the 2001 Lillian Smith Award for Poetry. In her introduction to the book, Dove said, “Trethewey eschews the Polaroid instant, choosing to render the unsuspecting yearnings and tremulous hopes that accompany our most private thoughts—reclaiming for us that interior life where the true self flourishes and to which we return, in solitary reverie, for strength.”

Trethewey is the recipient of fellowships from the Guggenheim Foundation, the Rockefeller Foundation Bellagio Study Center, the National Endowment for the Arts, and the Bunting Fellowship Program of the Radcliffe Institute for Advanced Study at Harvard. Her poems have appeared in such journals and anthologies as American Poetry Review, Callaloo, Kenyon Review, The Southern Review, New England Review, Gettysburg Review, and several volumes of The Best American Poetry. At Emory University she is Robert W. Woodruff Professor of English and Creative Writing. In addition to being United States Poet Laureate, she is the State Poet Laureate of Mississippi, from 2012-2016.