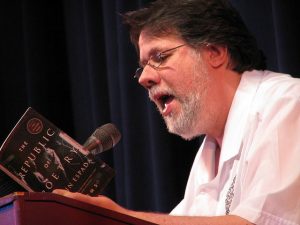 MARTÍN ESPADA is a prolific poet, essayist, and editor. Some titles among his many poetry collections include: Rebellion is the Circle of a Lover’s Hands (Curbstone Press, 1990), Alabanza (W.W. Norton, 2003), Crucifixion in the Plaza de Armas (Smokestack Books, 2008), and most recently, Vivas to Those Who Have Failed (W.W. Norton, 2016).

In 2001, Espada served as Poet Laureate of Northampton, Massachusetts. He still resides in Massachusetts where he works as professor of poetry at the University of Massachusetts Amherst.