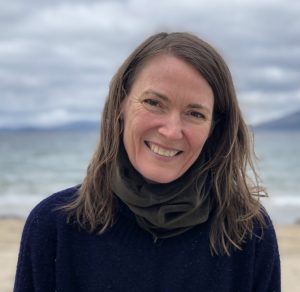 Karin de Weille  has taught literature at the University of Toronto, the New School, and John Jay College, where she was assistant professor, and creative writing at various venues: the Hugo House in Seattle, family shelters, senior centers, private schools, home schools and for various organizations including Poets & Writers in New York City. Her poems and essays have appeared in The Writer’s Chronicle, BigCityLit, www.poetz.com, Interpoezie, and other journals and anthologies. She has organized much lauded panels for the AWP conference, presenting talks there as well as at the Palm Beach Poetry Festival, the Virginia Woolf conference, and other conferences. She has created multimedia work for four iterations of Watersines at St. Marks Cathedral in Seattle, performed the lead role in Illuminatio at the Velocity Theater in Seattle, and most recently written and performed the first act of a poetry/movement theater piece for the Freehold Theater in Seattle. She holds a BA in economics from Princeton, an MFA from Sarah Lawrence College, and PhD in literature from the University of Toronto. Writings and recordings can be found at http://www.karindeweille.com and on vimeo.

Links
Karin DeWeille Official WebsiteDeWeille's craft essay, "How We Are Changed by the Rhythms of Poetry"