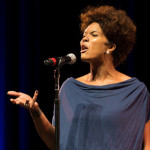 DOMINIQUE CHRISTINA is an award-winning writer, performer, educator, and activist. She holds five national poetry slam titles, including the 2014 & 2012 Women of the World Slam Champion and 2011 National Poetry Slam Champion. She has performed and conducted workshops for hundreds of colleges/universities, schools, community art spaces, nonprofit organizations, and conferences across the country. She has opened for Cornel West, appeared in Season 3 of Verses and Flow on TV One, performed for the Trayvon Martin and Emmett Till families at the Shiloh Baptist Church, and was a keynote speaker at the Emerging Women Conference and others. She also has created branding and marketing language for companies like Lotus Wei and Gaia Herbs. Her work has been published in: Huffington Post, Alight Literary Journal, Dead Animal Handbook, Hysteria Literary Magazine, Tandem Anthology, Pedestal Magazine, Heart and Soul Magazine, and Amulet Magazine. Her work is greatly influenced by her family’s legacy in the Civil Rights Movement and by the idea that worlds make worlds. Her first full-length poetry book, The Bones, The Breaking, The Balm: A Colored Girl’s Hymnal, published by Penmanship Books, is available now. Her second book, This Is Woman’s Work, is set for publication in October 2015.