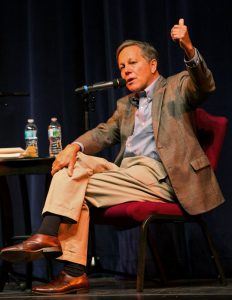 DANA GIOIA is the current Poet Laureate of California and author of five full-length collections of poetry, most recently 99 Poems: New & Selected (Graywolf Press, 2016). Former Chairman of the National Endowment for the Arts, he is a native Californian of Italian and Mexican descent. He received a B.A. and a M.B.A. from Stanford University and an M.A. in Comparative Literature from Harvard University.

His poetry collection, Interrogations at Noon, won the 2002 American Book Award. An influential critic as well, Gioia’s 1991 volume Can Poetry Matter?, was a finalist for the National Book Critics Circle award.

In 2014 he won the Aiken-Taylor Award for lifetime achievement in American poetry.