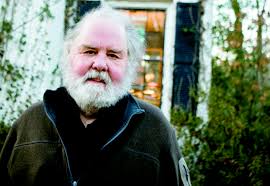 COLEMAN BARKS, born and raised in Chattanooga, Tennessee, went to school at the University of North Carolina and the University of California, Berkeley. He taught poetry and creative writing at the University of Georgia for thirty years. After meeting Robert Bly in 1976, he began translating the 13th Century mystic, Rumi. His first publication of the Rumi work, Open Secret: Versions of Rumi, was awarded the Pushcart Writer’s Choice Award by William Stafford. His Rumi translations were collected in a definitive best-selling anthology, The Essential Rumi, and re-issued in 1997. His work with Rumi was the subject of a segment in Bill Moyers’ Language of Life series on PBS, and a special, Fooling with Words, aired on PBS in 1999. A selection of the Rumi translations appears in the prestigious 7th edition of the Norton Anthology of World Masterpieces. The father of two grown children and grandfather of three, he is now retired in Athens, Georgia.

Links
"Glad" - Poetry Foundation Poems in The Cortland ReviewColeman Bark's website
Videos
Performance of Rumi's "What Was Said by the Rose"TEDx: Opening the Heart Through Ecstatic PoetryPoetry Everywhere