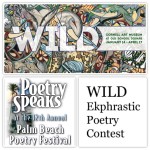 “It is with greatest pleasure that we announce the winning poems for the WILD Ekphrastic Poetry Contest. Announcing and presenting the accomplishments of the poets, in collaboration with the wonderful Plein Air Palm Beach artists is a grand finale to the festival’s celebration of National Poetry Month,” said Director, Susan R. Williamson.

Judge Stephen Gibson said, “Judging this year’s contest was a difficult delight, …  the quality of the work was such a delight that it made deciding so difficult. My congratulations to these fine poets and to all of those poets who submitted their works, though not mentioned in this final selection process.”

The contest project, in its second year, provides a platform for artists and poets to explore the relationship between visual and poetic inspiration. Ekphrastic Poems may include literal descriptions of a work of art, the poet´s mood in response to a work of art, metaphorical associations inspired by a work of art, or personal memories about a work of art. The poetic tradition of taking inspiration from works of art is “ekphrasis” from the Greek. The term “plein air” refers to or relates to painting in outdoor daylight.

“We are honored to feature the work of these poets and join with the artists and the work that inspired the poets, to celebrate the creative process.” said founder, Miles Coon. The winning poems & poets are:

About the First Place Poem, “Mermaids of Morrison Springs” Mr. Gibson wrote, “—a terrific poem, a ghazal I think that Agha Shahid Ali would have wanted to include in his anthology of ghazals Ravishing DisUnities. Wonderful and playful in tone, precise in image, yet with a carpe diem motif that works its way through the piece with aplomb, careful not to hammer the reader over the head with that moral.”

About the Second Place Poem, “Imagining Lily Ponds”—”an equally terrific poem, which approximates blank verse in its free verse approach, a poem understated in tone as it compares Monet’s lily ponds to the contest’s painting submission, and then moves in a surprising, unexpected direction, toward a darker theme involving the natural world whose surface placidity may be disarming but is also misleading. A wonderful piece.”

Cash awards are: First Prize: $100, Second, Third, Fourth Prizes: 4 awards of $25 each, 5 Honorable Mentions. Poems will be added to this page upon receipt of approvals of the poets.

Paintings were selected from the “WILD” Exhibit at the Cornell Art Museum, Delray Beach, Florida and poets were inspired by the selected award-winning plein air art.

The Cornell Art Museum is located on the Old School Square campus at 51 North Swinton, just south of the Crest Theatre building. Hours are Tuesday-Sunday, 10:00 am-4:30 pm; closed Mondays and major holidays. Admission is a suggested $5 donation.  For information on all Old School Square programs and services, call 561-243-7922 or visit OldSchoolSquare.org.

The 13th Annual Palm Beach Poetry Festival will be held January 16-21 at Old School Square in Delray Beach. The Festival features top poets at numerous ticketed public events, including readings, talks, interviews, panel discussions and more. Nine workshops will be offered for which applications are required. The Palm Beach Poetry Festival is generously sponsored by The National Endowment for the Arts, Morgan Stanley, The Legacy Group of Atlanta; the Cultural Council of Palm County, the Palm Beach County Tourism Development Council and the Board of Commissioners of Palm Beach County; The Palm Beach Post; Visit Florida; WLRN; and Murder on the Beach, Delray Beach’s independent bookseller.