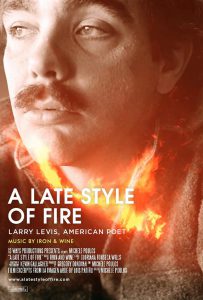 The Palm Beach Poetry Festival is pleased to support, in partnership with our friends, Palm Beach International Film Festival and O,Miami, the Florida premiere screenings of the feature documentary film, A Late Style of Fire, about the life and work of poet Larry Levis who died abruptly at the age of 49.

Featuring conversations with his poet friends, colleagues, an original score by Iron and Wine, and film excerpts by award-winning Spanish filmmaker Lois Patiño, this innovative documentary explores Levis’s childhood working alongside Mexican-American field hands, three marriages, friendships with America’s greatest poets, and his own words and poems for answers. Levis’ poem “The Space,” from his collection, Winter Stars, in which he writes:

The Self sounds like a guy raking leaves
Off his walk. It sounds like the scrape of the rake.
The soul is just a story the scraping tells.

Is self-destruction required for a serious life of art? Larry Levis is a poet who addressed this issue head-on, in his work and in his living. And he encountered and had friendships and relationships with contemporary living poets who are interviewed for the film.

What is the story of Larry Levis and what is his creative legacy? A Late Style of Fire presents an opportunity to explore the artist’s life through the eyes of some of America’s most important poets. The film itself has a poetic and lyric quality as created by filmmaker and poet, Michelle Poulos and producer and poet, Gregory Donovan.

A Late Style of Fire events include:

See the trailer below: