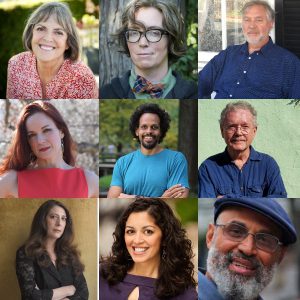 “The fellowships we offer cover full tuition and lodging,” says Williamson, “which represents a substantial investment in education focused on the craft of writing poetry. Also, because of the generosity of some very special donors, for the first time, we have been able to offer the first Thomas Lux Scholarship which honors the famous poet and long-time Festival supporter and in whose memory the upcoming Festival is being presented.” Scholarships at the festival cover full tuition for the workshop participant.

“This year the Palm Beach Poetry Festival has made enormous strides to further diversity in its faculty, participants and audience members,” says Miles Coon, Founder and President. “We have been blessed with very talented Fellowship and Scholarship applicants.”

The Festival’s 2018 Fellowship and Scholarship winners include:

Omotara James of Little Neck, NY, winner of the 2018 Thomas Lux Scholarship, who will study with faculty poet Ross Gay. A poet and essayist, James is the daughter of Nigerian and Trinidadian immigrants. Her chapbook, Daughter Tongue, was selected by African Poetry Book Fund in collaboration with Akashic Books for the 2018 New Generation African Poets Box Set. She is a 2017 Lambda Literary Fellow, a Home School Fellow, a 2017 Colgate Writers Fellow, and has been awarded scholarships from Cave Canem, the Bridging the Gap Award for Emerging Poets and the Nancy P. Schnader Academy of American Poets Award. James is an MFA candidate at NYU and guest editor at Luna Luna Magazine.

Dr. Patron Hennekou from Togo, West Africa, received one of two Festival Fellowships for African-Americans, and will work with faculty poet Tim Seibles. Dr. Hennekou is on a nine-month Fulbright Scholarship with the University of Nebraska, and is an Assistant Professor of English Literature at the University of Lomo in Togo. He is the author of Dovlo: A Worthless Sweat (play) and Souffles d’outre Coeur (poetry in French), and is working on a project that deals with the development of curricula in creative writing to be implemented by his home university in Togo.

Lolita Stewart-White of Miami won the other Festival Fellowship for African-American poets and will work with faculty poet Gabrielle Calvocoressi. She is a Cave-Canem fellow and Pushcart nominee, winner of the 2015 Paris American Reading Series Competition and was invited to read at Poets House in NY. Stewart-White was a semi-finalist for the Discovery/Boston Review Poetry Prize and Rattle Poetry Contest, and a Sundance Intensive Screenwriter fellow. Her work has been published in the Iowa Review, Callaloo, Rattle and Kwell.

Jubi Arriola-Headley of Fort Lauderdale is the winner of the Scholarship for African-American poets and will work with faculty poet Aimee Nezhukumatathil. He is a first-generation African-American, born to Bajan (Barbadian) parents, who also identifies as gay. As a black, queer man, in this historical moment, he is becoming accustomed to being portrayed, positioned, painted as a liability, a criminal, or at best – at best! – a victim. In a poem by Ross Gay, “Sorrow is Not My Name,” Arriola-Headley found encouragement and moments of joy in the midst of the everyday torrent of rage and grief.

Viplav Saini from Cleveland, OH, is the winner of the 2018 Kundiman/PBPF Fellowship, and will also work with Aimee Nezhukumatathil. Saini started writing poems two years ago and has studied with Matthew Olzmann, at the Fine Arts Work Center in Provincetown. He has completed a chapbook of poems. Saini writes in both Hindi and English, and feels equal parts Indian and American. He hopes to learn better how to navigate these two cultural influences as he creates more work.

Benjamin Antonio Garcia of Auburn, NY is the winner of the 2018 Canto Mundo/PBPF Fellowship, and will also work with Ross Gay. Garcia is a Community Health Specialist who provides HIV/HCVSTD and opiate overdose prevention education to high risk communities throughout New York’s Finger Lakes region. A graduate of Cornell University’s MFA Program, he was named the 2017 Latin@Scholar at the Frost Place and a finalist for the 2017 Boston Review Poetry Prize. His work has appeared or is forthcoming in Kenyon Review Online, Best New Poets, 2016, As/Us, Gulf Coast, West Branch Wired, The Collagist and PANK.

Cody Ross Romero from New York City received the 2018 Sarah Lawrence Scholarship, and will also work with Aimee Nezhukumatathil. Romero is presently matriculating for his MFA Degree in the Sarah Lawrence Graduate Program in Poetry.