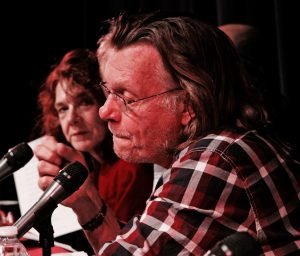 On Sunday, February 5, 2017, Thomas Lux passed away. For the Palm Beach Poetry Festival, Tom’s death has left all of us bereft. Rather than dwell on Tom’s biographical history, his 14 collections of poems, his well-earned prizes, awards and accolades, I wanted to share some personal recollections on what I think of as his fatherhood of the Palm Beach Poetry Festival. 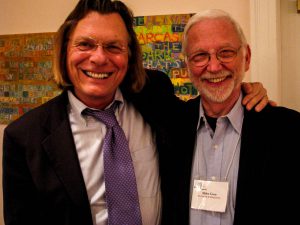 I first met Tom in 1997 at a Summer Seminar at Sarah Lawrence. He invited me to join a four-participant workshop that met in his office once a week, 7-9 pm, for 10 weeks. I felt so lucky to receive his careful, considered critiques of my poems–and so happy to get to know him in those intimate sessions. He offered many suggestions of poets I should be reading. Tom knew my early poems inside-out. His door was always open, a symbol of his generosity and devotion to his students.

Finally, I asked him if he would recommend me to Sarah Lawrence’s MFA program. He laughed. “Miles, you want me to write a letter to myself? You’re in!” At 60, I was not your typical MFA student. What a gift Tom handed me, a two-year program in poetry writing that the College allowed me to pursue over four years so I could go to Florida in the winter! Tom was my thesis advisor but in the second semester of writing it, Tom went to Georgia Tech. We worked by email until I graduated in 2002.

Thanks to him, I had four magical semesters at Sarah Lawrence, learned from master poets, and my classmates, such kind, wonderful people. Never competing with each other; always trying to help each other improve our poems. That tone, that human concern, was set by Tom in every classroom. The festival has tried to follow his example. 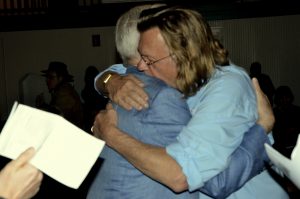 Tom was always there with a word of encouragement during the formative years of the festival. When I asked him to serve as Chair of our Poets Advisory Board, he said yes, immediately. That was 2006, before there was such a board. Tom called Billy Collins, Stephen Dobyns, Mary Karr, Vijay Seshadri and Ellen Bryant Voigt, who all agreed to serve. And Tom helped me recruit Kurt Brown to help with national marketing in the early years, and Laure-Anne Bosselaar. Those great poets have given us the literary gravitas we needed to grow the festival over the years and who have provided invaluable advice, and memorable participation in the festival. 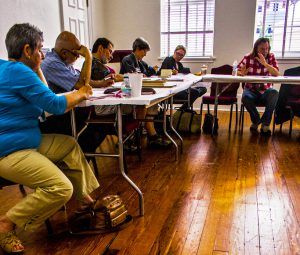 From 2005 through 2016, Thomas Lux taught his critique-based workshop, “Word by Word, Line by Line,” at the Palm Beach Poetry Festival. In these workshops, like a surgeon, he examined each poem on the table, considering its condition under a microscope fitted with a variety of lenses, ie. the unaccented syllable lense; the cliché lense; the line break lense; the adverb lense (he said he allowed himself only two adverbs-a year! A sure sign the verbs they modified were weak). We learned that every syllable counts, and that it isn’t inspiration that makes a great poem, but hard work… at least 20 drafts. God, he loved to teach! He was proud to teach. His generosity and commitment to each student is nothing short of legendary.

Tom often began a new workshop by looking around the room and saying something like, “we’re in this together, all of us, odd balls. If a Martian walked in as we talked about where to place a comma, he’d climb back into his space ship and head for home. Poetry isn’t so popular on Mars.”

I remember the high school kids who won the first Palm Beach Poetry Festival High School Poetry Contest. He and Billy Collins, Sharon Olds, and Patricia Smith posed for photos with those budding poets. And then Tom turned to them and said, “Your poems are so good, you worry me. I don’t need the competition.” How they beamed and laughed. Tom was so unpretentious, so without ego or guile, humble, tender, generous to a fault.

I addressed his absence in January by saying that it was due to personal reasons as he requested. I delivered his warm regards to everyone at the festival and said he was booked to return in 2018. And believe me, we will bring him back by reading aloud many of his poems and celebrating his life and work at A Tribute to Thomas Lux, on Saturday, January 20, 2018. The festival is and shall be an homage to Thomas Lux who made it all possible. May God keep him close, and at peace.

Mimi and I loved Tom, and his wife, Jenny, and his daughter, Claudia. We share their grief. His life and his poems remain blessings for all of us…God particles, if you will.