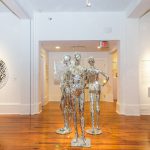 Her skin is an ornamented network of mixed glass

My hand becomes her hand

Her leg becomes my leg

To feel the sharp creases between her diamond facets

And disappear within her reflection

My body is perfection within her proportions

For a moment, it is me that’s the mannequin

But I move too quickly and disappear

Melissa “Monster” Renaud was born, and currently now lives, in the Detroit Metro area. She earned her bachelors of art in creative writing from Eastern Michigan University and is currently working as an event usherette with Retro Girls Detroit. Her work has been featured in Eastern Michigan’s student written one act festival, and numerous songwriter showcases. With art, her goal is to create magic, love, empowerment and understanding in everyday life. When not writing, she spends her free time playing the ukulele, making hand embroidered artwork and roller-skating with the Detroit Roller Derby.

THE PRESS OF LIGHT BY Paul Weigl

We thought that after you swallowed it all—

the glass, the sand, the sun—

that everything inside you

would either tear apart or burn.

But it was the pressure of your voice

that closed in to save you.

and trapped all the air

within the pink folds of your lungs.

When you finally spoke—

when the rock of your tongue rolled away—

the words came out in bright shards.

Everything was a sharp fragment

that needed to be made blunt.

I gathered them up

so that they could be fixed against

each inch of stretched skin.

Everyone else can see

what is mirrored back at them,

but I can actually feel the radiance they gather.

I can touch the underside of all that swallowed sun

reflecting back against the lighted world.

Paul Wiegel lives and writes from his home near the Fox River in Berlin, WI. His poems have appeared in various journals both in print and online, including The English Journal, Hermeneutic Chaos Journal, and Whale Road Review. He has been writing and performing on-demand poems as a “street poet” on his 1957 Smith Corona manual typewriter for passersby at art galleries, farmers’ markets, and festivals for the past six years. He is a past winner of the John Gahagan Poetry Prize and the Lakefly Writers’ Conference poetry award. You can find him at www.foxriverpoetry.com

SO, GLITZY GALS, by Erika Michael

to remix those broken bits epoxied to your ass and — oh, I know, I know,

of some Willendorf or other mama-magic takeaway.

all the busted spangle stuck on dummies?

sluiced with pump spill slumped in mirrors of long lenses. What museum’s

gonna’ stockpile crates of cracked reflections from a thousand pupils.

Who’ll mend shards of icons collected in the endless retrospective of love.

on the floor in shadowy lobbies of pachyderms.

Erika Michael lives in the Seattle area. With a Ph.D. in art history from the University of Washington, she taught at Trinity University, Oregon State, and the University of Puget Sound.  She has participated in a number of poetry workshops including those of the late Thomas Lux, Carolyn Forché, Linda Gregerson, Laure-Anne Bosselaar, and Tim Siebles. Her work has appeared in Poetica Magazine, Cascade: Journal of the Washington Poets’ Association, Drash: Northwest Mosaic, Mizmor l’David Anthology, Bracken Magazine, The Winter Anthology, The Princeton Institute For Advanced Study Letter, Belletrist Magazine, and elsewhere.

Inspired by: “Muse” by Jeremy Penn 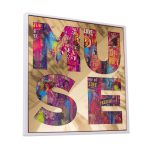 And mold me as you deem

Wow them with your omniscience over stone and flesh –

Over me – how I entice

the stories that call to you out of your rocks.

And write your epics

Cast me as your Eve – Madonna – Magdalene

Use my body to climb up

Those steep ladders to the footnotes in history.

And compose your Symphonies

Use me to travel from heaven to hell

on an opium leitmotif

Write a thousand lieder in my image.

of what is left

A few bits of flesh in dried acrylic.

For they will never know the one forever stripped off

Remolded and painted till

That facsimile of a forgotten original

Hailing from the beautiful South Indian coastal state of Kerala seeped in green and poetry, Feby Joseph is a spiritual vagabond still trying to figure it out.  Presently Feby is working in a desert – counting other people’s money while words waltz about in my head. Some of Feby’s works have appeared on Café Dissensun, Oratoria, Wild Word and EntropyMag.

Inspired by: “Facade” by Elle Schorr 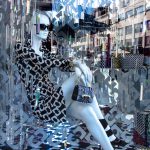 FAÇADE FOR SIRI by Jennifer Greenberg

there are only so many things we can let out of their cage:

We make them in our image (and voice)

to wake us up on time,

(or help us feel less alone).

of the convenient, omnipotent assistant

to the unorganized animals: us.

speaking to the stars,

never to leave, never to love

(if she were even capable of loving)

forever kept in a glass house

for her to give and

all until we stop asking

for the answers to existence,

and what Alice found there.

Jennifer Greenberg is a poet and fiction writer from South Florida working on her BA at Florida Atlantic University. Her works have been published in anthologies with The Creative Writer’s Alliance.