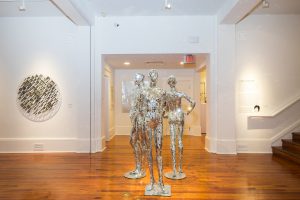 THE MUSES by Linda Flaherty Haltmaier

Some say there were only three,
the original triad of inspiration,
Hesiod tripled the crew to nine,
giving them jobs and names
like Calliope, Clio and Erato–
amplifying the whispers
heard by mortals
that toil in the tar pits
of creation.

I imagine them as mirrored figures,
nearly invisible,
that slip in and out of blind spots,
leaving trails of light behind–

A murmur under a dented hat
and Whitman hums a song of himself,
The impulse to tell the truth, but slant,
taps at Emily’s bedroom window,
A visit to a London flat
ends with a bang and not a whimper,
And eons before, a throaty hint
conjures Odysseus’s voyage
to a land where pig men prosper
and women sing with tongues
of steel and promise.

Words and stanzas strung together,
a godliness reflected back
in its most human form,
narrowing the space
between god and mortal.

Judge Stephen Gibson’s comments:” This is a terrific poem that brings in Greek myth, Whitman, Emily Dickinson, T. S. Eliot, Homer, and poets right up to the present, precise in its imagery and spot on in its tone—a wonderful work.”

Linda Flaherty Haltmaier is an award-winning writer and the Poet Laureate of Andover, Massachusetts. She is the winner of the Homebound Publications Poetry Prize for her full-length collection, ‘Rolling up the Sky’ (2016). She was also a finalist for the Princemere Poetry Prize and the Tucson Festival of the Book Literary Award. Her poetry has appeared extensively in journals and anthologies including Ink & Letters, The Wild Word, Switchgrass Review and more. Her next full-length collection, ‘To the Left of the Sun’, is forthcoming in September 2018 from Homebound Publications. A Harvard graduate, Haltmaier lives on the North Shore of Boston with her husband and daughter.