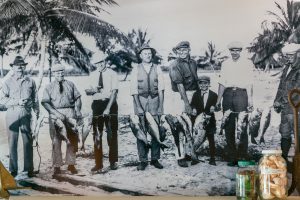 Inspired by: Pioneers’ Catch of the Day,
Every Face a story, Delray Beach circa 1910

CATCH OF THE DAY
by Sarah Brown Weitzman

Four hours from the harbor

we reach the river

where the Gulf Stream greens

We have come out

for marlin, tuna or sword

but snag instead a dolphin fish

the color of the current.

it thrashes, then quivers

toward death. We watch

In the toss and drop

of the anchored launch

we are forced to think

of change as loss,

of death as a fading

of more than flesh

but we dare speak

only of what remains

not what got away.

Sarah Brown Weitzman is a past National Endowment for the Arts Fellow in Poetry and has been published in hundreds of journals and anthologies including Rosebud, The New Ohio Review, Poet & Critic,  The North American Review,  Rattle, Mid-American Review, The MacGuffin, Poet Lore, Spillway,  Miramar, and others.  A departure from poetry, her fourth book, Herman and the Ice Witch, is a children’s novel published by Main Street Rag.