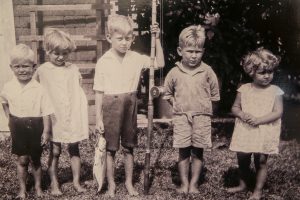 Inspired by: Uncle Bob’s First Fish,
A Pompano, 1928. “A manatee nearly
knocked over the boat.”

Nobody looks pleased at the prospect of

fish. They sag from fingers, brushing the ground –

tail to cropped grass, to earth, no present love

by our bare feet, toes still traced with sea-salt,

dragging ocean creatures out to drown

in the empty dryness of the cobalt

We wrinkle noses at the smell’s assault

and our eyes at the sun. The fish’s death

serves no real purpose. It’ll be our meal

and a story to tell, but without depth

around the fishhook’s hole. There’s no appeal.

Judge Stephen Gibson’s comments: “This is a terrifically well-crafted, terza-rima sonnet, which employs the form so well that it doesn’t ever intrude. The language remains conversational and tonally exact, right up through the concluding couplet. A wonderful poem in subject treatment and form use.”

Zoë Stephan was born and raised in Miami, Florida, and attends Miami Arts Charter School, where she is about to finish her senior year. Her work has been published internationally in several journals and anthologies, and her senior portfolio was awarded a national silver medal in the Scholastics Art & Writing Awards.  She aspires to being a novelist or screenwriter, though being a scientist isn’t off the table quite yet, and intends to pursue these aspirations at the University of Miami beginning fall 2017.