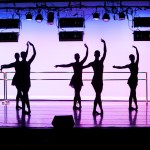 A special event, “Ballet’s Child,” inspired by the poems of Lani Scozzari with choreography by Donna Goffredo Murray was presented on Friday night. See the trailer for this beautiful and moving collaborative performance.

Chard deNiord: ALL THINGS COUNTER, ORIGINAL, SPARE, STRANGE
Linda Gregerson: POETIC ‘YIELD’ with LINDA GREGERSON
Thomas Lux: WORD BY WORD, LINE BY LINE
Maurice Manning: LISTEN TO THIS: SOUND & STRUCTURE IN WRITING POEMS
Molly Peacock: THE RIB CAGE OF THE POEM: WRITING FORM FROM THE INSIDE OUT
Brenda Shaughnessy: NAMING THE NAMELESS
Patricia Smith: STRAINING THE BORDERS
Robert Wrigley: TO DELIGHT, TO INSTRUCT, AND TO WOUND

2015 Festival Lineup included:
ALL THINGS COUNTER, ORIGINAL, SPARE, STRANGE with CHARD deNIORD
This workshop will combine generative prompts and close critiquing of at least three poems by each student. We will focus on the lyric and lyrical narrative, concentrating in particular on “the news that stays news” ... Read more >
POETIC 'YIELD' with LINDA GREGERSON
When does it become a poem? What can you do when it floats on the surface and stalls? What’s the difference between the almost-passable look-alike and the real, the un-fake-able, thing? If we enter the ... Read more >
WORD BY WORD, LINE BY LINE with THOMAS LUX (2015)
We will pay close attention, in minute detail, to all the elements that go into writing a poem. So: we’ll do word by word, line by line readings. Frost said that the primary way to ... Read more >
LISTEN TO THIS: SOUND and STRUCTURE IN WRITING POEMS with MAURICE MANNING
Robert Frost once said a poem enters our ear before it enters our eye. I’ve found that a compelling observation. Poems indeed have a certain sound: they sound a certain way, utilize various means for ... Read more >
THE RIB CAGE OF THE POEM: WRITING FORM FROM THE INSIDE OUT with MOLLY PEACOCK
In this workshop we will think of poetic structures as a rib cage to let a poem breathe—letting go of the idea that a received form can trap inspiration. Instead, we will explore the surprises ... Read more >
NAMING THE NAMELESS with BRENDA SHAUGHNESSY
Most of life’s experiences transcend or defy explanation, yet it is often precisely that which is confounding, mysterious, elusive, or fleeting we feel called (or pulled) to write about.  “Poetry exists to give name to ... Read more >
PATRICIA SMITH WORKSHOP
In a generative workshop designed to elicit discomfort, we will stretch the boundaries of the ordinary and predictable by searching for unexpected entry points into our work. We will go beyond discomfort and write through ... Read more >
TO DELIGHT, TO INSTRUCT, AND TO WOUND with ROBERT WRIGLEY
There are poems that do one of these things. There are others that do two. It may be that the best do all three. But what is the source of a poem’s delight? How does ... Read more >