Come, desire this cinnamon purse,
its delicious cream, vinyl-slick with blood-thickness
in a feminine hand of red talons,
now nearly a fist, holding the silk-skin cone
like a microphone-phallus of want, want, want
whose slick shiny streams melt & drip
organic as a stickiness
savage fashion may lust for,
devour & swallow to be a mannequin
metamorphosed from perfect plastic
to the sumptuously messy
wanton greed of the flesh. 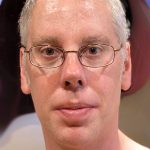 Stephen Mead is an Outsider multi-media artist and writer. Since the 1990s he’s been grateful to many editors for publishing his work in print zines and eventually online.  He is also grateful to have managed to keep various day jobs for the Health Insurance. Currently he is resident artist/curator for The Chroma Museum, artistic renderings of LGBTQI historical figures, organizations and allies predominantly before Stonewall,

There are going to be all these rich, Republican women at that lunch . . . wearing mink coats and diamond bracelets. And you’ve got to look as marvelous as any of them. Be simple—show these Texans what good taste really is.                    —JFK to Jackie Kennedy before Dealey Plaza, November 22, 1963

Dealey Plaza:   the cheering constituency lining
a gray November street, as the 1961 Lincoln Continental
four-door convertible passed in the grandeur of
All Hail The Chief—SS-100-X—
crossing in front of the grassy knoll, as an opening umbrella
transitioned to an abandon-ship explosion of blackbirds
veering from premonition &
a lone man with a camera recording the drive-by, the film slow-
motion jerking, startled by the rifle cracks &
wet thud of multiple bullets boring into brain & bone
the national shock as fingers-point
towards the Dallas Book Depository   or the grassy knoll?
The close-up zoom
to Jackie, scrambling onto the trunk of the death car,
trying to retrieve the back of her husband’s head?
but ever fashionable in panic:   a bundle of pink,
just like a drift of blossoms, lying in the back seat.

The pain & horror
of murder pooled abstract red in Jackie’s lap, like a sudarium
stained with her husband’s blood,
her pink wool-bouclé, double-breasted Chanel suit
with navy blue lapels, & fashionable, matching pillbox hat,
that ended up being more than just a fashion statement:

Jackie’s act of resistance & resilience, bookended
by flags at half mast & JFK Jr.’s funeral salute.
The only thing missing,

her hat & white gloves, lost in the frenzy of protocol &
grief—maybe now, just an echo
from the Cathedral of San Salvador. 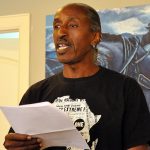 henry 7. reneau, jr. writes words of conflagration to awaken the world ablaze, an inferno of free verse illuminated by his affinity for disobedience, like a discharged bullet that commits a felony every day, a spontaneous combustion that blazes from his heart, phoenix-fluxed red & gold, exploding through change is gonna come to implement the fire next time. He is the author of the poetry collection, freedomland blues(Transcendent Zero Press) and the e-chapbook, physiography of the fittest(Kind of a Hurricane Press), now available from their respective publishers. Additionally, he has self-published a chapbook entitled 13hirteen Levels of Resistance, and his collection, The Book Of Blue(s) : Tryin’ To Make A Dollar Outta’ Fifteen Cents, was a finalist for the 2018 Digging Press Chapbook Series. His work has also been nominated multiple times for the Pushcart Prize and Best of the Net.

Note: Jackie Kennedy’s iconic pink bouclé ensemble, with navy blue lapels, still remains hidden from public eye, stored in a custom made, acid-free box in the climate-controlled National Archives Building in College Park, Maryland, along with Oswald’s rifle, bullets and bullet fragments from the shooting, the original windshield of the limousine, and more than five million pages of assassination-related records. While the items were sent to the National Archives, they technically belonged to Caroline Kennedy following her mother’s death. In 2003, she signed a deed of gift, with the provision that the suit be preserved but not displayed publicly, until at least 2103, so as not “in any way to dishonor the memory of the late President or cause unnecessary grief, or suffering, to members of his family.”

She likes the double-breasted look, imagining yachtsmen unfurling
sails to catch the prevailing southwest winds, reefer jacket buttons
like areolas on a torso bracing against the red sky in morning,
two nipples on each sleeve rising above the sway of hips.

But the color is not hers, even if the cloth feels like clouds
on her desert skin. The O’Keeffe persona is black and white,
settled as a mesa, large as a black iris. Timo’s pink suit shines
timeless behind the glass in Tribeca, but it would never fit her.

Still, the buttons glimmer, so she casts pink threads windward,
like a hollyhock transforms Pedernal. Colors drip in the Abiquiu
hills like music, pink and blue, trills of oils smeared, refashioning
the open spaces between notes, not in black but pink.

At the end of the day, Georgia O’Keeffe opens her sewing
box and fingers the Corozo buttons like found bones. 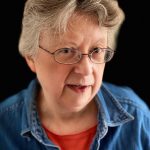 Susan Carroll Jewell loves everything about ekphrasis, including its ancient Greek origins. Her work can be found online at Rattle Magazine’s Ekphrastic Challenge, the Iron Horse Literary Review PhotoFinish, and Poets Reading the News. Susan was born in New England, has graduate degrees from the University of Virginia and the University at Albany, and now lives and writes in Cocoa Beach and Upstate New York. In non-pandemic years, she’s a regular at the Second Wednesday Poetry Open Mic in Schenectady.

I’m told that for architects, Dorian Gray Syndrome refers to a rehab job
that leaves an old building looking better
than when it was new;
so it is, that structuring an ensemble
out of the flotsam and jetsam of modern life,
with bits and bobs of consumeristic plastic
becoming the embellishments that reveal
a sensual shoulder
and the flowered flounces that surround
a great pair of legs;
a makeover of the color gray so it’s no longer drab,
but chic.
The transformation of drinking straws,
those symbols of profligacy and waste
which have become today’s version of moral turpitude
(replacing the disapproval of sexual depravity in Oscar’s time),
into a dress that is completely desirable,
and will undoubtedly also make the wearer desirable, too,
is the ultimate in DGS. 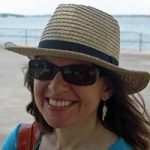 Victoria Otto Franzese owned, operated, and wrote for a successful online travel guide for 15 years before selling it to a major media outlet. Now, thankfully, all of her travel is for fun. Her poems, stories, essays, articles, and interviews have appeared in online and print publications from The Sunlight Press, Hippocampus Books, the Creative Writing Institute, Blue Heron Book Works, Medusa’s Laugh Press, the Southeast Missouri State University Press and many others. She holds degrees from both Smith College and New York University. She splits her time between Palm Beach and New York City.

She found the dress in an attic bin,
The fabric, once red as the blood
from her grandmother’s fingers, was now
oily black, gobs of chiffon reminiscent
of enraged ocean swells—the corset, brittle,
hard as finger bones, eerily strung
against bleached petals, webbed like ripped ribbons.

Shock struck her as she grasped it,
horribly wrinkled in her manicured hands,
it had wilted and grown greasy with rot,
but was more enthralling than ever before.
She had sneered at the gift as a young woman,
wearing a tighter dress to the dance instead, even after
requesting that her grandmother make alterations.

She chuckled at the corruption, and on a whim
decided to slip in once again, even
adorning her ceramic neck with the
matching chains—now knotted and missing jewels.
Gross was her grin, at her beauty tainting
something so inherently decrepit. Yet in the mirror,

Her lungs folded in on themselves as her skin
began to pool, gravity beckoning—
the dress biting into her abdomen as if made of iron.
Her milky flesh, like bloodroot flowers, burst
with hidden spider veins, gnarled carmine rhizomes,
growing dark spots like mold, her shoulders protruding
like gargoyle wings, eyes choked by cataracts.
She screamed as her soul was ripped out, revealed—
as both she and the dress, were purified
deeply read—beautiful again.