Abstraction of abstraction
So representational.

The artist with the art,
in the art, the fiction complete.

According to Contest Judge Stephen Gibson, “This spare, brief, thirteen-line poem delightfully engages the art work—and the reader’s ear, with its slant rhyme use used to slant meaning in relating its sly view of Dechambay’s equally sly piece.” 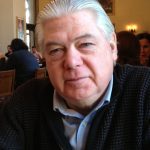 Django Bisous is a Canadian and divides his time between Toronto, Europe and Key West. Poetry is a relatively new pursuit for him, with most of his creative time usually focused on writing creative non-fiction or fiction in the short story format and keeping a blog for his friend. His current major undertaking is the completion of a book in the epistolary style. His work can be read at djangobisous.com

While submitting his prose for publication and to various contests has been an active pursuit over the last several years, this is the first ekphrastic poem he has written, the first poem acknowledged by a judge and first publication of any kind for Django. Accordingly, he cannot stop grinning!