Daedalus was not a man, Icarus no boy. That’s a myth.
Without a husband to bind her, Daedalus turned nature
inside out, taught her daughter to fly from earth; after all,
men couldn’t fence air. Feathering Icarus in sequence

up, casting her shadow on a ploughman, head lifted from
his rut, who grumbled, A woman’s place is in the home.
The mother tried to lift her arms higher to buffer her daughter
but blue enveloped Icarus who cried, Let’s fly all the way

to Trinacria. Knowing Samos was north and Calymne east,
Icarus ignored the earth’s warning being traced out for her
by the sharded coast of Crete. Unlike the moon that eclipses
the sun, filial duty cannot blot desire. Hopefully, the joy

gleaming in Icarus’ green eyes flashed, mercifully blinding,
and blocking the sight for Daedalus: her only child encircling
wings, writhing like a corn snake carried aloft by a hawk.
Imagine the girl, her mother’s support failing, the aerial lift

and impulse spent. Dripping to the sea, only the wax
hissed, floating as islands do. Daedalus did not fly again.
Unused, feathers yellowed; wax stiffened in her wings
that stretched out more like a shroud than a swan in flight.

Says Contest Judge Stephen Gibson, “It’s easy to see how Rick Lazes’s Meghan inspired “An Old Husband’s Tale.” This narrative is a wonderful, and chilling, retelling of the Daedalus-Icarus myth, this time with both characters being female, mother-daughter rather than father-son, and, with this version, though being perhaps more liberating initially, is, in the end, as with the original, cautionary.” 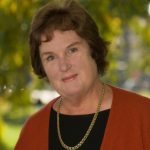